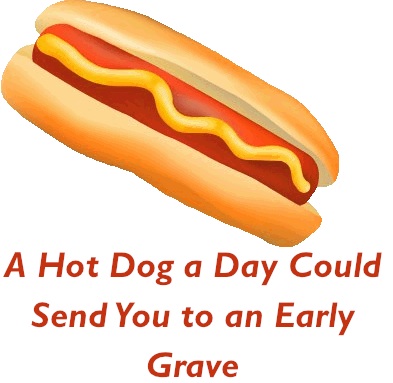 A national medical group considers hot dogs as bad as cigarettes, since one 50-gram serving of processed meat a day highly increases the risk of colorectal cancer.

Traditional hot dogs are made from pork trimmings; the pieces left over after chops, bacon and ham has been cut away along with chicken or turkey.

The meat is ground into a paste and mixed with water, preservatives, flavoring and colors; they contain nitrites, which are used as preservatives, primarily to combat botulism. During the cooking process, nitrites combine with amines naturally present in meat to form carcinogenic N-nitroso compounds. It is also suspected that nitrites can combine with amines in the human stomach to form N-nitroso compounds. These compounds are known carcinogens and have been associated with cancer of the oral cavity, urinary bladder, esophagus, stomach and brain.

Think twice the next time you give a hot dog to your kids, its an easy fast fix for a hungry family, but they might have to deal with the consequences later, remember…we are what we eat.